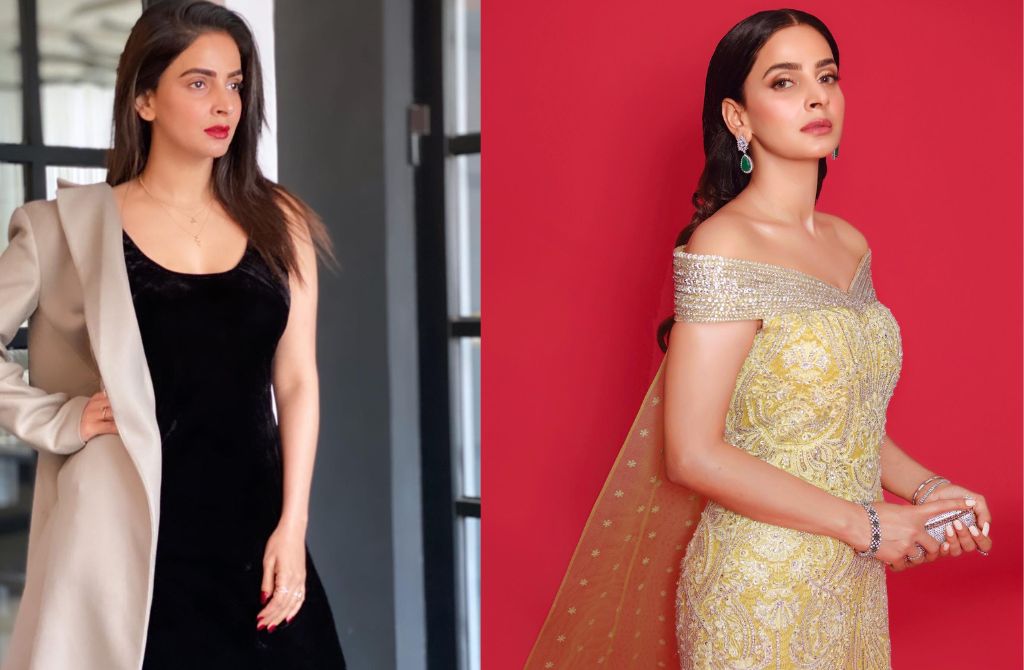 Saba Qamar Zaman is the queen of expressions and versatility. Her Showbiz name is Saba Qamar. A Pakistani actress, Model, Tv Host, and Presenter who is loved not just in Pakistan but all around the globe. She has a unique style and personality

Saba was born in Hyderabad, Sindh on 5th April 1984.she moved to Gujranwala, Punjab after the death of her father along with the family. She got her early education in Gujranwala and for further studies she moved to Lahore.

She appeared in PTV home television series MEIN AURAT HON in 2005.The series was followed by several series including Chaap in 2005, Dhoop Mein Andhera hai in 2006, Kanpur se katas tak in 2007. And Unbiyaanable in 2007.

She appeared In ATV’s Khuda Gawah which was the remake of 1992 indian film of the same name,and the biographical drama jinnah ke naam,which was the production of ptv home in the direction of Tariq Mairaj.

She played the role of Fatima Jinnah and series was a tribute to founder of Pakistan, Muhammad Ali jinnah. Qamae received the nomination for best Tv actress at lux style awards.

In an interview with Express Tribune, Qamar Confessed, for me, acting is being able to express the feelings, emotions and expressions of different people and characters”.

Establishing with Dastan and professional expansion

In 2010, she appeared in a supporting role of Surraya in HUM TV’spre partition tv series .Dastaan,an adaption of RAZA butt’s novel BANO.

Saba was seen oppositeAhsan khan,sanam Balooch,and Fawad khan.series proved to be a break through for her and she won many awards for that.

Thia was followed by a supporting role in PTV home’s social drama on women, BINT E ADAM. In the same year she was starred in Abrar Ul Haq’s music video BOLIYAN.

Saba Qamar then appeared in Sarmad Khoosat’s romantic series Pani Jaisa Pyar. Where she played the role of a girl Sana who has been engaged to her mother’s best friend ever since she was a child but Adarsh has been unaware of the engagement as his parents thought he should focus on education than wedding plans.

It was followed by ptv’s TERA PYAR NAHI BHOOLR she was paired opposite Ahsan khan. later she appeared in MAAT where she played the role of a selfish, self-obsessed Saman opposite Adnan Siddiqui. The series was a massive hit and got thirteen highest rated Pakistani tv series.

The following year she collaborated with sami khan in geo tv’s three projects jo chale to jaan se guzar gaye, tere ik nazar and main chand si in 2011. She then appeared in Ameen Iqbal’s Thakan in 2012. It then followed by leading roles in Na kaho tum mere nahi in 2012 and Yahan pyar nahi hai in same year.

She gained recognition for portraying a range of characters in serials Shehryar Shehzadi in 2012,kash Aisa ho in 2013,sannata in 2013 and Ullu Baraye Farokht Nahi in 2013as well.she worked in tv film AINA in 2013 opposite Faysal Qureshi.

Qamar’s career prospects began to improve in 2014 .she appeared in five projects jaanam,bayemaan mohabbat,bunty I love you,izteraab and digest writer.she appeared in three series in 2015 in the comedy series S.H.E .

She then starred alongside Adeel Chaudry in Kaisay Tumse Kahon. The following year, in 2016 she was starred with Mikal Zulfiqar for the third time alongside Zahid Ahmed in Kashif Nisar’s SANGAT. She played a role in biographical drama MANTO directed by Sarmad Khoosat. The film was also adapted as a TV series in 2017 titled Main Manto.

In 2016 she played the role of a struggling actress in the drama mein sitara. The serial was based on lollywood golden era .she appeared alongside Mekaal Zulfiqarshe did Besharam opposite Zahid Ahmed.

Qamar next played rockstar opposite yasir hussain,in a travel comedy film LAHORE SE AAGAY.later that year she played a psycho-thriller8969.she was also offered hindi films ONCE UPON A TIME IN MUMBAI,HEROINE which she declined.

After the situation between Pakistan and India normalized, the comedy drama HINDI MEDIUM in 2017 was done by her opposite Irfan khan. It was marked as her first project in Hindi cinema,

In 2017 she worked in the biographical drama series Baaghi ,in the role of Pakistani controversial figure Qandeel Balooch. It was the one of highest grossing drama of he year. In 2018 Qamar appeared in three short films.